So for a long time the art of “contouring” which is to create the illusion of more defined cheekbones, has hit social media with a huge bang and it seems like everyone has bought into this craze. I remember when I first started wearing make-up, I never used ‘contour kits’, I would use a bronzer. At the time I had no idea that was called contouring, years later all you hear is contour, contour and contour. Soon all the brands had kits and all the MUA’s and beauty moguls are raving about them with all the reviews in the world.

Powder or cream? I prefer powder, but every now and then I would use cream ones. Even though I always use powder I still went through a phase of buying cream contour kits. I’ve listed the ones I’ve used so far from worst to best – both drugstore and high end.

It’s cheap and cheerful, but actually really perfect. It doesn’t leave you cakey and the tones are perfect for my skin tone. Sleek have managed to leave a natural, bare, skin-like result. The cream is easily blendable so you don’t need extra products to create it. The palette comes in four shades, light, medium, dark and extra dark. I usually go for a light palette as I feel the mediums on all kits are too harsh when it comes to the contouring shades. So all in all, this is my favourite and it won’t break the bank being priced at £10.99 (I got mine from Boots).

Another kit that is perfectly priced to not break the bank and if you’re on a budget is the NYC contour cream kit. I found that the creams were blendable (not as blendable as sleek but close), I used a flat foundation brush (morphe) to apply the yellow highlight shade and then with a slightly damp beauty blender I dabbed lightly which worked pretty well to not leave patches like other cream contour kits. The contouring shade isa little light but I’m not one for an exaggerated contour so it works for me but if you like the exaggerated look then I would go for a shade darker. I don’t ever use the cream shimmer highlighters in any kit so I won’t comment on it. But the NYX kit only has 1 contour shade, 1 shimmer highlight and 1 yellow highlighter in their kits which is a little limited for people who prefer an exaggeration but for me I only use one contour shade and one highlighter.

I got these mainly for colour correcting as I’ve heard good reviews. But I decided to try the Yellow colour corrector and the Toast concealer for  contouring. I would probably use light Ivory for highlight instead of Yellow Colour Corrector if I was to use these again, I was just experimenting at the time. But all in all it wasn’t that bad, the Yellow worked okay for highlighting, although I didn’t use much of it but the Toast for contouring worked the best out of all the contouring shades. Plus, these L.A. Girl Cosmetics have a little brush on the end of the product for applying which makes it so much easier.

When this first came out I was so excited as I have the powder version and i’m in love with it, I use it all the time. So I bought this and was eager to try it out, but when i did i wasn’t in love. I was really disappointed. The colours were really orange and just not for me. I never used the palette again. But now they have a new & “improved” version of the Light kit and i can say it is much better, not orange anymore, not thick and its much creamier than before. So that’s a plus, but I would still give it a miss if you’re looking for a contour kit as its on the pricey end and not perfect, yet. 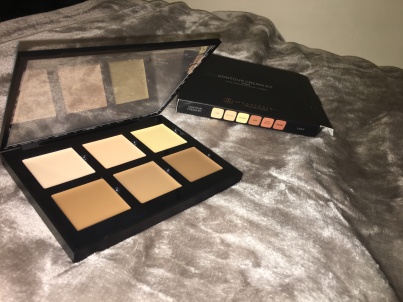 Now, this has to be my worst kit ever. I would really avoid this. I’m so sad and angry saying this about it, but there was a major hype and it was sold out everywhere for a long time. I can still remember the struggles I had to get and I had to order mine from harrods which didn’t come for two weeks after I ordered. And, after all that wait and the craze on social media it was AWFUL. I don’t think it works well with my skin tone, it wasn’t easy to apply and blend and some of the shades were a bit too shimmery for me. I only used it once, so maybe I was having a bad makeup day so I will give it a go again and see but i’m in no rush to try it.

Can I just say that you don’t actually need a ‘kit’ to master contouring you just need a few concealers or foundation, a lighter concealer and a darker concealer can do the trick.

But from those I’ve listed drugstore kits are definitely winning for me and saving me some money. So, if you want to try contouring and want to use a kit then I would recommend the Sleek kit as the best one. Since Anastasia Beverly Hills is really popular and most people want to use her kits I will upload a picture of Sleek and ABH to show the difference. This will be the new ABH kit as I gave my old one away to my sister. I just haven’t uploaded one applied now as i’m going through a bad skin stage and avoiding too much makeup on my face. 😦 😦 😦

One thought on “THE CONTOUR KITS.”